COLUMN: An exciting Super Bowl game may be great for sports fans but it is weird for those of us in marketing, advertising, publicity and communications. The ads and promotions are the whole point of the afternoon and a good game just gets in the way. Anyone watching NBC during the day would have seen four or five pre-game shows, each lasting approximately as long as the Civil War, but finally, the big event started. 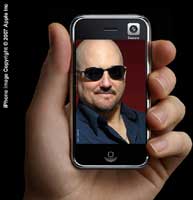 Well, the game started. Run, pass, block, kick, etc. etc. etc. Then it was on to the main attraction, the eleven bazillion commercials. Well, supposedly only 67 ads, but it sure felt like more.

Standing out for me were the car spots, like the one with the crashes, and all the ads with people saying really incredibly stupid things. Wow, that made for an absolutely hilarious good time and certainly did a lot to raise the public’s attitude about our profession.

Okay, on to the ads.

Hyundai
There were three commercials for Hyundai, one of which was exciting visually (brightly colored vehicles going impossibly fast) and aurally (Smashing Pumpkins on the soundtrack). The commercial invited viewers to edityourown.com although that site takes so long to load that I’m certain it drives people away. Another was a well-produced montage of rival auto makers shouting “Hyundai?!” as they read about some award the Korean manufacturer had received. The ad was well-produced but insipid. Their last one was meant to be comforting and humanistic, I guess, but instead was just a downer as it condescendingly says “buy a Hyundai and if you lose your income we’ll let you bring it back” or words to that effect. Tell you what, why don’t I just keep my current car and then none of us will have a problem. Besides, since everyone was paying $100,000 a second to run their spots, I don’t have a lot of faith in their fiscal judgment.

Audi
Slam-bang excitement as Jason Statham is on the run through several decades and many other makes of cars until the Audi A6 sedan comes through for him. Big production, superb direction, crisp editing and dynamite audio. Plus, it made me want to go test drive the car. Hey, a commercial that actually achieved a change in the audience. The work of Venables Bell & Partners in San Francisco, this one is worth repeated plays.

Doritos
PepsiCo’s Frito-Lay division launched two commercials, one very funny, the other very, um, what’s the word I’m searching for here. . . oh, I know: stupid. The good one had the crunch of the product altering people, places and things until the predictable ending where the product user/abuser got his comeuppance.

Some Beer
Conan O’Brien starred as himself as he considered doing a commercial that his agent claims will only be seen in Sweden. We see the horrible spot, as do his fans, and O’Brien is openly ridiculed. The commercial was supposedly about beer, but I don’t see how.

Bridgestone
It’s difficult to believe that the Richards Group was responsible for this drivel involving Mr. Potato Head in one spot and some astronauts in another. Hey, I like tires and tread and cornering and traction. If you tell me stuff about that, I’ll pay attention. I positively do not purchase tires because of Mr. Potato Head or space travel. These are truly bad commercials. Although the outer space one did have “Jump Around” by House of Pain as the music track. Retro-Cool sounds, man.

Monster.com and their competitor
The Monster.com ad made me laugh out loud and I hadn’t even gotten to the tequila yet. With an operatic aria on the soundtrack, the camera lovingly moves through a nice office with a moose head on the wall. Then it keeps on going to show the cubicle next door where the rest of the moose has its business end right in the face of the chair moistener assigned to that desk. Yup, time to post your resume on Monster, dude. Later in the program, competitor Careerbuilder.com vomited up an ad that was mindless in the extreme, with the same lines repeating ad nauseam. Hard to fathom how the once-great Wieden & Kennedy could be responsible for this reprehensible piece of dreck. Unless, of course, Careerbuilder is for people whose sole attribute is being able to say “Would you like fries with that?”

Cars.com
Here’s a mini-epic of a guy who oozes confidence and success but who quakes at the thought of negotiating to buy a car. The facts provided by Cars.com are the cure for this problem. Nice spot, nicely done. DDB Chicago done good with this one.

Toyota
Although the production is terrific, unfortunately the ad is for another unnecessary moronmobile, the Venza. And this is from an auto company that’s supposed to know what it’s doing. I guess the idea is that since they’re helping the planet with the Prius they can also go after the troglodyte crowd that has to pad their own egos with an SUV.

Castrol Motor Oil
Monkeys and motor oil? Not a good mix. Although it was nice that the soundtrack features the title cut from Iron Butterfly’s 1968 “In-A-Gadda-Da-Vida” album.

Coca-Cola
“Mean Troy” puts Troy Polamalu into the part made famous by Pittsburgh Steelers legend “Mean” Joe Greene as he limps into the tunnel on his way to the locker room. But this is for Coke Zero, which, um, is different, and so, uh, different stuff happens, some of which makes you laugh, but I still don’t know anything about Coke Zero. The company also had a long animated spot in which insects steal a Coke from a nice guy and do icky stuff with it. Not sure how this helps make me interested in their product. There was also a Coke ad where people shape-shifted into and out of their online avatars. Coke helped two of them meet each other. Well, I know that my avatar is always thirsty and likes meeting pretty girl avatars, but I’m suspicious that the owners of those avatars are less like Scarlet Johansson and more like Comic Book Guy on The Simpsons.

Beer again
There were more stupid spots for some beer company that shall remain nameless. The commercials seemed to be telling us that horses make their beer, or horses like their beer, or horses sweat into their beer. Or something. A total waste of money IMHO but then I drink Red Stripe or Guinness (thank heavens I can admit that now that they’ve switched to really cool commercials with terrific pulsating electronic music).

Denny’s
Making fun of the kiddie-style breakfasts at their competitors, Denny’s is still ripping off The Sopranos. But they got across the point that they have a serious breakfast.

3D Extravaganza
This was a joke, right? Apparently, 3D stands for dim, dumb and dubious. First, it was nearly impossible to find the damn glasses. After going to a Von’s, two Ralph’s, a Fry’s and a Target, I finally located a floor manager who said they had them at Customer Relations (you know, the Return Counter). It took her 128 seconds to detach two pair of glasses for me. The press materials claimed that 125 million pairs of glasses were being distributed, so at 64 seconds per pair, that’s eight billion wasted seconds for the USA work force. No wonder we’re in an employment crisis. The 3D ads for “Monsters vs. Aliens,” SoBe Water, and an episode of “Chuck” were an embarrassment. The picture was dark, the screen dynamics were on the level of bad storyboards, and there’s more 3D excitement in every panel of “Doonesbury,” which is a 2D comic with witty dialogue but little action. Ya gotta love the publicity department for Pepsi’s SoBe, however, as they had this to say about their silly spot with an angry version of the Geiko gecko: Their ad is a “modern interpretation of the famed ballet Swan Lake, and the rhythmic effects when the players and creatures are infused with the refreshing and reinvigorating impact of SoBe Life Water.” What a load of BeEs.

GoDaddy
Both of their spots pandered to juvenile male sexual fantasies, so naturally I loved them. Brilliant work, guys. Each one directed viewers to godaddy.com for “more” or the “uncut” versions. All righty, I visited godaddy.com and sure enough, you could view the commercials in their TV versions or the “Hot” Internet versions. But the company is making a fundamental error here. There isn’t anything even remotely hot about the Internet versions. There’s nothing in them that couldn’t have aired on broadcast TV. They promised titillation and instead delivered an episode of Hannah Montana. But, you know, without the hot parts.

G
Oh yes, I just love it when a company spends a lot of money to promote my name. Turns out this is actually for Gatorade but there’s no way you would know that from the ad.

Bud Light
Guy in shirtsleeves carries a six-pack of Bud Light Lime through a raging winter location and it turns into summer. Okay, I’ll go along with that. The demographic that buys American beer would probably get this and like the idea.

This. That. The Other.
Man, there were a lot of ads. Some were okay. Chevron did their animated talking car thing with the nice Hector Elizondo voiceover at the end. AT&T showed their spot with the dad on a business trip sending home photos of his kid’s monkey doll. H&R Block showed us Death not getting good tax advice. Funny concept.

Stupidity
There was no end of folly in this year’s crop of ads. E-Trade had their idiotic talking baby. General Electric had a modern animatronic scarecrow with Ray Bolger singing “If I Only Had a Brain” to convince consumers that, um, well, that they like “The Wizard of Oz” I guess. Who knows with that company’s ridiculous advertising. Pepsi had a sophomoric parody of an action adventure show. Or was it Coke? No one knows or cares. Teleflora had something about flowers being delivered in a box instead of by a person. WTF? Who sends flowers in a box? Cheetos had an ad with an animated lion and some annoying people being attacked by birds. Again, WTF? Kellogg’s Frosted Flakes showed growing plants, as if that would convince anyone to buy sugar-coated cereal. Heineken keeps sticking with their bad Franz Kafka ads utilizing formerly good actor John Turturro. Infinity hates their own autos so much they’re back to showing other things for most of the spot, in this case, someone swimming. Cash4Gold was doing some sort of parody of a bad rap video.

And on it went. I’ve left out a bunch of them, but only because I just don’t care any longer. Anti-creativity, anti-innovation, and anti-entertainment were often the order of the day.