After seeing one of Sony’s debut TV spots for their new PlayStation(r), I’m sure I was not the only one slightly freaked out by the toy baby who comes to life, starts to cry, then laugh maniacally before flashing demon red eyes… all while pawing the air toward the floating black slab of a PlayStation 3 (PS3).

Maybe they should have called it the PlaySatan? I think the message here is “Parents, keep baby away from the PS3 or they’ll be possessed!” 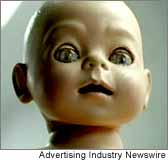 The second TV spot prior to launch, promoting the Cell Processor which is inside the PS3, shows a floating Rubik’s Cube that explodes to fill the room with color. To me this ad smacked too much of the flawed launch spots for the Infiniti Q which featured mood music and somber scenery with nary a view of the actual car.

Contrast this with the lively first TV spot for the other nextgen console competitor, Nintendo’s Wii, that shows a typical gamer dude playing the game and showing off the innovative controller putting him into the middle of a shooting game, sword fighting game and actually showing the game play on a TV.

From these varied commercials, I was impressed by the game play of the Wii which had the very cool concept of putting the player into the action rather than old-school thumb mashing. I had seen some previews on G4techTV, E3, etc., but it still looked really good. The strength of the Wii commercial illustrated many of the features and benefits of the new Nintendo console, whereas the initial Sony spots were just plain weird.

Not that this is a bad thing – a heck of a lot of people have been remarking about the demon baby commercial (do a search on the Web for “PlayStation baby commercial” if you’re curious). I can tell you it’s even freakier late at night on my 61-inch DLP TV while on an HD broadcast channel. Yikes.

The second batch of PS3 commercials include a wall breaking away to show one of the launch games “Resistance: Fall of Man” (which I’ve played – outstanding) and another “sensory” commercial showing the Sixaxis controller tilting to and fro to make eggs roll across the room where all the spots have lived, obviously inspired by 2001: A Space Odyssey. It’s still a little odd with black crows coming from the wall and follows the PS3 launch theme of “play b3yond.” The “beyond” theme actually reminded me a lot of the Showtime Beyond channel intro/outro spots between programs.

A second Wii spot should start this week and it will be interesting to see what they do to counter the PS3 approach. Of course, with both consoles sold out everywhere as of this writing, the commercials are practically unnecessary to sell the products.

Still, it’s interesting that the PS3 has taken an edgier approach — which historically worked well for Sega — while Nintendo seems to be taking a fun, hip, friendlier approach to court both new users and their core audience. I bought my PS3 this past Friday, got it on Saturday, played it on Sunday. I hadn’t thought of buying a Wii, but the commercial makes me more interested.

Another neat feature of the Wii for the party gamer is that it’s far more affordable than the PS3 and will likely return in quantity to retail stores more quickly than the way “under produced” PlayStation (Sony blames slow production of the blue laser diode for the Blu-ray player as the major hold-up).

According to varied business reports, over 32,000 of the new Sony consoles were sold on eBay from Friday through Sunday, with the average price being around $2,000 – $3,000 for the 60GB/wireless model. I paid close to the low end of that range, admittedly, but I think a lot of gamers have been similarly “possessed” into buying one, regardless of cost.

Thankfully, my eyes haven’t yet turned red. Hopefully if there’s evil built into the new PS3, maybe it only works on babies. But, I left the light on in my living room last night, just to be safe.