KIRKLAND, Wash. — This October 26th, on the printing industry’s equivalent of Oscar(R) night, Jonas Roeser rose to enthusiastic applause to accept a “PIXI” — one of the coveted 2008 “Printing Innovation with Xerox Imaging” awards. The PIXI’s are handed out once a year to honor producers of America’s most creative brochures, flyers, space ads, and other print objects. Roeser is the Senior Vice President of Marketing & Operations of LTC Financial Partners, LLC (LTCFP), one of the nation’s most experienced long term care insurance agencies.

Roeser won his PIXI for the “Most Unique / Innovative” entry, a print piece called “Secret Agent Invitation.” The piece was used to promote a yearly meeting of national field agents. 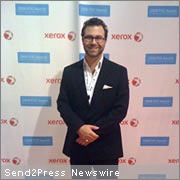 “We’re proud of Jonas, his department and our strategic partners,” says Cameron Truesdell, CEO of LTCFP. “Their outstanding efforts are one of the reasons we have grown to more than 550 agents in five short years.”

Roeser won his award among entrants from over 100 countries, including Australia, Brazil, Canada, Hong Kong, Japan, Turkey, the U.K. and the U.S. All submissions were independently judged by a panel of international leaders from every major segment of the graphic arts industry. Submissions were weighted on the criteria of business effectiveness, use of digital technology, degree of innovation, and overall aesthetics.

“These awards reflect just a fraction of what we’re doing,” says Truesdell. “Thanks to our whole team, we’re expanding rapidly in spite of the economy. We’re actually looking to add 500 new agents in 2009.”

Inc. Magazine recently ranked LTCFP No. 1,353 among all companies, and No. 12 in the insurance category, in its annual ranking of the 5,000 fastest-growing companies in the nation. Among insurance agencies, LTCFP is the fastest-growing one focusing exclusively on long term care insurance sales.

LTCFP was also honored recently by the Direct Marketing Association (DMA). On October 14, Roeser’s “Secret Agent” project was a finalist in the competition for a coveted ECHO Award, which singles out the world’s best direct marketing campaigns. The sit-down dinner and awards ceremony was hosted by comedian and Emmy award winning host of the “Tonight Show,” Jay Leno.

In addition, this month LTCFP was ranked number 62 among the fastest-growing private companies in Washington state, by the Puget Sound Business Journal.

For those interested in a career in management or sales, information on LTCFP is available at http://web.ltcfp.com/ltcfp/join-our-partnership.aspx.