AUSTIN, Texas — David Hubbard, executive vice president and creative director for Austin ad agency MDS Advertising, announced today that MDS would serve as agency of record for the just completed AT&T Executive Education and Conference Center at the University of Texas at Austin. MDS will create a comprehensive launch and awareness campaign for the $140 million, Lake/Flato designed hotel, meeting and executive education complex that opened in late September. The center is under the operational direction of FLIK International, a division of UK-based hospitality giant, Compass Group PLC. 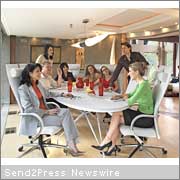 The AT&T Executive Education and Conference Center (www.meetattexas.com) features sophisticated meeting and conferencing facilities, 297 guest rooms, upscale and casual restaurants, boutique-hotel amenities and an array of catering services. With quiet elegance and unmatched proximity to the university’s many resources, the complex was designed to be a leading center for executive education and the central gathering place for UT faculty, as well as the destination of choice for those drawn by the university’s and Austin’s cultural, educational, business, athletic and academic happenings.

“We were honored to be selected by the AT&T Conference Center as their agency,” said Hubbard, “and pleased that MDS continues to win new accounts in today’s economy. Our client family is diverse-and that diversity is invigorating creatively. From a business perspective, diversity keeps the agency strong and the ideas fresh. Doing creative work for multiple types of industries means we stay flexible, versatile and inspired.”

Additional new client partnerships for MDS include Layher USA, the American arm of global scaffolding giant, Layher International (www.layher.com). According to Hubbard, MDS will rebuild the company’s stateside brand presence and create a new website and ad campaign focused on strengthening Layher’s U.S. market penetration. Recognized as a leader in the scaffolding industry in Europe, New Zealand and Australia, Layher is an industry forerunner widely acknowledged for its leadership, engineering, safety and product innovation in scaffolding technology. Layher is the originator of the integrated modular scaffolding system.

Other new MDS clients closer to the agency’s hometown in Austin include The Texas Department of Information Resources (www.dir.state.tx.us). MDS will work with DIR on branding initiatives, including collateral and trade show exhibit. The DIR mission is to transform the delivery of technology to government agencies and public education institutions so they can better serve the citizens of Texas.

Another new MDS client with global roots is TREESwithMEANING.com – an innovative, online company that will be the first and only company to bring genuine Israeli olive trees to the U.S. market. TREESwithMEANING.com will offer its first release of certified, hand-cultivated olive trees imported from the Holy Land in April 2009, in a limited edition of 6,500 trees. MDS is developing branding and a launch ad campaign, collaterals, as well as a website and e-commerce platform for the company.

While new business is essential, successful client relationships that continue over the long haul are equally important, says Hubbard. According to the creative director, MDS puts a high priority on delivering quality performance and client satisfaction year after year.

To demonstrate the point, Hubbard notes that, along with new client festivities, MDS will celebrate its tenth year working with another high-profile UT-affiliated client-the University of Texas Investment Management Company. MDS began working with UTIMCO in 1999. The ad agency developed UTIMCO’s brand identity, and has been designing and producing UTIMCO’s award winning, multi-piece annual report collateral sets and its online annual reports since then. UTIMCO’s 2007 annual report was a 24-piece set that earned MDS multiple design awards.

UTIMCO (www.utimco.org) manages the largest public endowment fund in the United States. Managing the investment assets under the fiduciary care of the UT System Board of Regents, the organization oversees investments valued at more that $24 billion. A leader in the advancement of fund management practices for public and private endowments, UTIMCO was the first external investment management corporation formed by a public university.

Clearly, successful long-term client agency partnerships start with successful first year relationships Hubbard notes. “When you start out with a new client, it always feels great,” he says. “The real test happens over time. When you feel even more excited by the possibilities as you continue with a client-you know it’s going to be great for a long time.” Hubbard is celebrating another one of those type successes this month.

“We’ve just completed our first year working with the Iron Workers District Council of Texas and the Mid-South States. We developed a long-range campaign for this terrific organization which is now launching.”

The union brought MDS in to work with them on new branding, collateral and website design for a national initiative focused on rebuilding market share, strengthening partnerships between the union and signatory contractors and recruitment efforts. To make certain the effort hit the ground with serious traction in Texas and the mid-South, MDS developed an evolved, sexy and strongly messaged brand renovation, website (www.ironworkerstxmidsouth.com) and a series of multi-tiered print and online campaigns to drive recruitment and B2B development initiatives.

“We face many of the same challenges our clients face,” says Hubbard. “You’ve got to get creative to get your message out there and make it important to your audience. You have to break through the clutter and let your audience know the value-to them- of what you do. Our clients have great products, services and ideas-our job is to make sure we get that message over to their markets. That’s where the fun begins.”