Arizona native and Scottsdale resident Kathy Anderson, President of Anderson Retail Tourism Marketing, is celebrating 30 years in a unique aspect of the travel and tourism industry - Shopping Tourism. Traditionally, one thinks of a travel and tourism businesses as being airlines, hotels, rental cars, attractions and of course, destination marketing organizations like convention and visitors bureaus (CVB's). 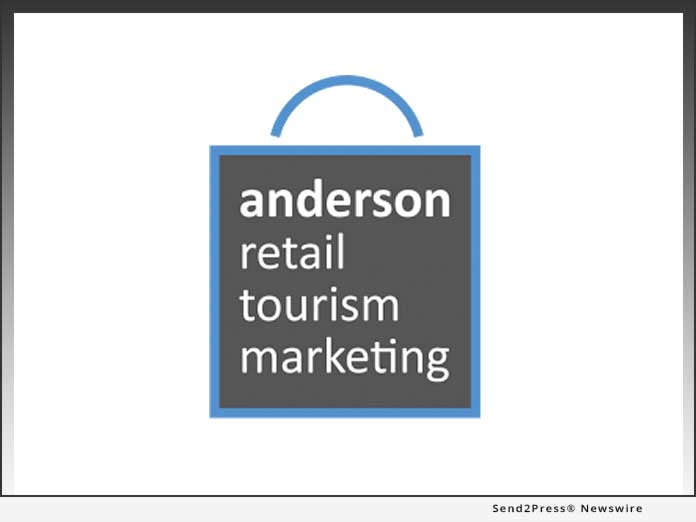 Arizona native and Scottsdale resident Kathy Anderson, President of Anderson Retail Tourism Marketing, is celebrating 30 years in a unique aspect of the travel and tourism industry - Shopping Tourism. Traditionally, one thinks of a travel and tourism businesses as being airlines, hotels, rental cars, attractions and of course, destination marketing organizations like convention and visitors bureaus (CVB's).

However, according to statistics from the U.S. Department of Travel and Tourism, shopping and dining are two of the top three activities done by both domestic and international travelers, contributing greatly to a destination's tax revenue. When this data emerged in the early 90's, Anderson utilized her marketing expertise and built a company dedicated to creating and implementing strategic tourism marketing programs exclusively for shopping centers, retailers and restaurants throughout the U.S.

Anderson's entre into the travel and tourism industry began as Fashion Director at Saks Fifth Avenue in Phoenix. It was the late 80's when resorts such as the Ritz Carlton and The Phoenician were opening, Anderson identified that visitors to these new resorts, as well as existing properties such as the Arizona Biltmore, would be including shopping on their travel itineraries and could contribute additional sales to Saks revenue. She began packaging special amenities and services for the resort guests to increase awareness and visitation to the store.

After leaving Saks Fifth Avenue in 1990, Anderson assumed the role as marketing director for Scottsdale Fashion Square, managed at that time by Westcor Properties. As part of the property's first redevelopment and expansion, she developed the center's tourism program, creating marketing partnerships not only with local resorts, but also travel professionals in the U.S., Mexico and Europe. She attended trade shows in Mexico City, Berlin, London and throughout the U.S. with the Arizona Office of Tourism and Scottsdale CVB to generate pre-arrival awareness, traffic, and ultimately increased sales to Scottsdale Fashion Square's retailers and restaurants. As a result of her efforts, she received several awards from the Scottsdale CVB and the International Council of Shopping Centers.

Anderson's next venture in 1996 was as marketing director with The Rouse Company's Arizona Center, where she attained a stronger knowledge of the group and convention business in downtown Phoenix, working closely with the Phoenix CVB and Convention Center. During this time, the U.S. Department of Commerce began research that indicated the importance of retail sales to shopping destinations along with tax revenue generated specifically by international visitors. As a result, in 1996 Anderson started her own company, AZ Travel Marketing, which later became Anderson Retail Tourism Marketing (ARTM). The company specializes in developing and implementing tourism marketing programs and public relations for shopping center developers and their tenants.

Anderson Retail Tourism Marketing's first national account was with The Rouse Company's 18 festival marketplaces located in Boston, NYC, Baltimore, Miami, New Orleans and other key travel destinations. In 1999, Anderson co-founded the Shop America Alliance, an organization promoting tourism at over 200 shopping centers and retailers nationwide. She assisted in the development of Shop America Tours in 2001 and added Fashion Show Las Vegas to the ARTM client roster. In 20015, when The Rouse Company was acquired by General Growth Properties (now owned by Brookfield Retail Properties), ARTM was responsible for integrating the two companies' tourism programs and created an award-winning tourism campaign branded as "America's Premier Shopping Places," representing 24 properties, which was recognized with a MAXI award by the International Council of Shopping Centers.

In 2010, ARTM created another award-winning tourism program for Westfield San Francisco Centre, resulting in the development of a national tourism campaign for select U.S. Westfield centers and airport retail, branded as the "Westfield Travel Collection". That same year, Anderson was also recognized as "Shopping Tourism Person of The Year" by the Shop America Alliance. In 2012, ARTM developed and launched a tourism campaign for Fashion Island and Irvine Spectrum Center, owned by the Irvine Company. The company expanded its portfolio again in 2016, to create new tourism campaigns for two luxury shopping destinations owned by Oliver McMillan, The Shops Buckhead Atlanta and River Oaks District Houston.

In 2017, Anderson founded the USA Luxury Shopping Consortium, http://www.usaluxuryshopping.com/, which is comprised of 10 luxury shopping centers and retail districts located in key travel destinations throughout the U.S. The Consortium and its partners are "Preferred Shopping Destinations" of Virtuoso Travel Network, the world's leader in luxury travel bookings, and was recognized as Virtuoso's "2018 Most Innovative Global Alliances Partner." Last year, ARTM also assisted Oliver McMillan (now owned by Brookfield Retail Properties) with the development of a global tourism program for a mixed-use development, Fifth + Broadway Nashville, scheduled to open in 2020. Most recently, the company developed a strategic tourism plan for Swire Properties' luxury retail project, Brickell City Centre in Miami and is currently consulting with Visit California on tourism strategies for the state's retail industry.

Anderson's career has taken her to 23 countries on 4 continents as well as 34 states in the U.S., where she maintains business relationships with key travel trade and media. She is an active member in a variety of retail and travel industry organizations. Anderson holds a degree in Fashion Merchandising and a Certified Marketing Director (CMD) designation from the International Council of Shopping Centers. She has been married 40 years and has two adult children-coincidentally-one in the hospitality industry in Scottsdale and one in the shopping center industry in Las Vegas.

Learn more about Anderson Retail Tourism Marketing at: http://www.retailtourism.com/ or contact at: 480-588-5507.