RMN Classical is excited to announce that "CHORAL & ORCHESTRAL WORKS" by Brian Field, produced by Rick Romano and distributed by RMN Music, will be released worldwide on Apple Music, Spotify, Amazon Music, Google Music and all digital platforms on October 15, 2020. 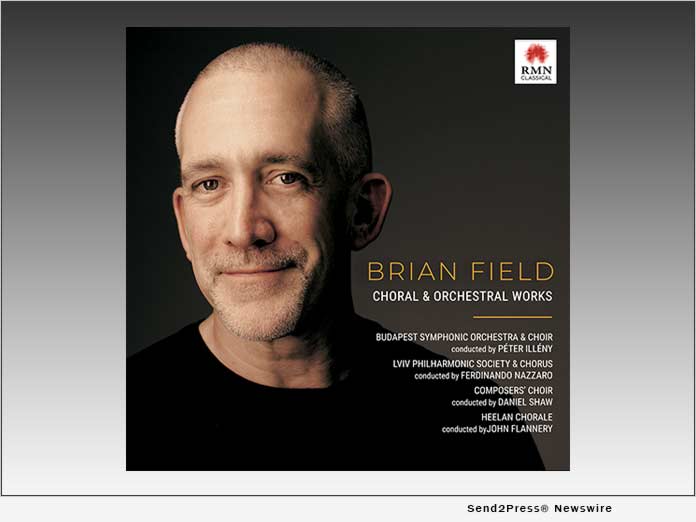 RMN Classical is excited to announce that "CHORAL & ORCHESTRAL WORKS" by Brian Field, produced by Rick Romano and distributed by RMN Music, will be released worldwide on Apple Music, Spotify, Amazon Music, Google Music and all digital platforms on October 15, 2020. The album, a collection of 12 works written by the composer in recent years, explores mysticism and includes instrumental works for ensemble, large orchestra and choral works. His works are performed throughout the U.S. and internationally.

"Beatitudines," a far-reaching work, sees the choir and a large orchestra conjunct. Two tracks for choir and organ close the Latin section leading the listener to the final track. A little gem, gospel-like song, "Sweet Forgiveness," brings the album to completion in a coda-like style.

"This compilation of 12 works showcases some of my more recent choral and large-scale instrumental/orchestral works," Fields, an internationally-acclaimed and renowned composer, says.

The music is an eclectic fusion of lyricism and driving rhythm that brings together elements of post-romanticism, minimalism and jazz.

"Apart from the jazz-influenced, 'Nine, Four by Four,' the works in this compilation embrace and celebrate the mystical. In many cases, these are mystical elements of faith and in others the secular, though equally mystical reflections of life and memory," Fields says.

"I'm honored to have the opportunity to work with Brian, a truly rare contemporary talent and an all-around great person," RMN Classical music director, Romano, says. "He was the winner of our competition for new music - which is how we discovered him - and I'm incredibly excited to release this album and showcase all his music ideas."

Field began his musical endeavors at a very early age. He studied piano and then received an undergraduate degree in music and English literature; a master's in music from the Juilliard School in New York City and a doctorate from Columbia University. Field studied and deepened his musical knowledge with Noel Zahler, Zosia Jacynowicz, John Anthony, Linda Skernick, Milton Babbitt, George Edwards and Mario Davidovsky, among others. An award-winning composer, his compositions are recorded on various classical record labels and distributed worldwide. He has written music for solo, chamber ensemble and orchestra, ballet, stage and television.

For more information about Field: https://www.brianfield.com/

RMN Classical is a specialized label - part of RMN Music, and launched by composer-producer, Rick Romano, to promote and nurture the contemporary and sound-art music scene in all its ramifications developing and producing original ideas and voices through a range of projects and releases curating and nurturing an ever-growing catalogue of works and artists.

Its labels - RMN Records, RMN Classical - promote musical diversity through production, promotion and development of a variety of different projects including new album releases and events across a wide range of genres with no distinction of countries, age or background.