Philosopher and historian Procopius Canning announces the release of "The Modern Prometheus: Why the 21st Century Intellectual Must Be Fearless to Succeed" (ISBN: 979-8735137177). In this book, Canning, writing as an exiled fugitive 300 years from today, combines science fiction with established philosophical concepts. 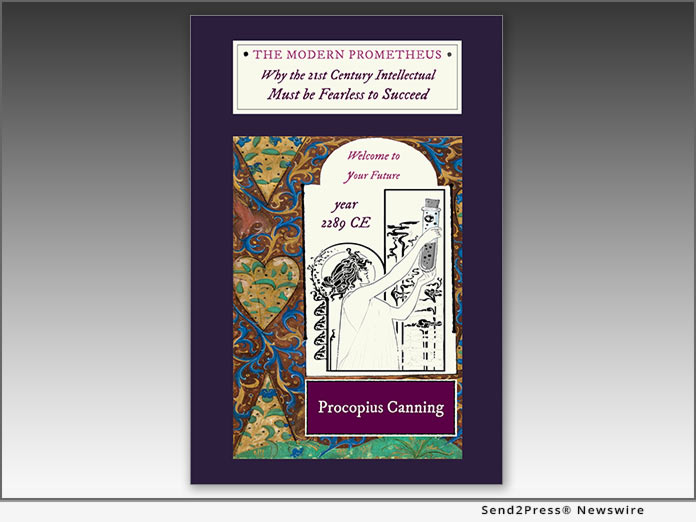 Philosopher and historian Procopius Canning announces the release of "The Modern Prometheus: Why the 21st Century Intellectual Must Be Fearless to Succeed" (ISBN 979-8735137177). In this book, Canning, writing as an exiled fugitive 300 years from today, combines science fiction with established philosophical concepts to critically investigate current news events, and the controversial social issues behind them, using the perspective of a future whistleblower historian and philosopher.

Cast in the years 2114 to 2290 CE, after the U.S., Canada, and Mexico have united to form the Glorious Tri-North American Alliance, an omnipotent Board stifles freedom of thought under the guise of preserving democracy, with secret tribunals. These furtive trials are made privy to the reader by future historical chronicler Procopius Canning, and the reader gets to witness them only because he surreptitiously smuggled out his official recordings, which were then made into this ominous and prophetic book. Using this device, social issues are explored, and philosophy becomes courtroom drama, as various characters are put on trial three centuries from now, for intellectual transgressions against prescribed social order.

"Philosophers have had to deal with cancel culture for thousands of years. Consider the unfortunate fate of Socrates, Hypatia of Alexandria, and the Rev. Dr. Martin Luther King," says Canning, adding, "the ability to think freely is sacrosanct to philosophers; exploratory freedom is an essential ingredient for humanity's intellectual evolution, and a vital pillar of genuine democracy. Cancel culture is the erosion of freedom of thought, and thus also, of philosophy itself."

In this thought-provoking book, Canning weaves together a melange of compelling and often provocative topics, explored using different characters, each facing punishment, some death. These include future Nobel Prize winning scientist Eugenia Barbara Florstein, charged with Criticism Extra Humanitario, for researching Professor Jordan Peterson's use of Jungian archetypes, Terrence Devon Wagner, who as every future schoolchild knows, in 2256 CE, proved Einstein's Theory of General Relativity false, using the symbolic logic that is included in the book, and for comic relief, Rafael Edward (Ted) Cruz III, a future politician who just can't seem to get elected, due to vicious viral memes against him, based on his ancestor's association the the Zodiac Killer. Even the philosophy of gothic novelist Mary Shelley, and her philosopher mother Mary Wollstonecraft, must be cancelled, if modern standards are applied, according to the Board.

Ultimately a call for calm, reason, tolerance, and the Golden Rule, 'The Modern Prometheus: Why the 21st Century Intellectual Must Be Fearless to Succeed', uses current events to show that philosophy, literally, "the love of wisdom", is as relevant and useful for understanding our world today, as it was in 300 BCE. Available on amazon.com.

Procopius Canning B.A., B.Ed. is a retired educator, author, and creator of two of the most visited ancient Roman history sites on the internet, TIMELINE: Ancient Rome, and Gladiator: The Real Story. These scholarly web sites have won three awards from the Encyclopedia Britannica, have over 2.4 million page views, and have internationally held simultaneously both the 3rd and 4th place search result positions for ancient Roman history on Baidu, the most popular search engine in China. He is also the author of "ANCIENT BLACK CIVILIZATIONS MATTER: Sort of like Wakanda, only real!" (ISBN: 979-8696570037).