A new and interactive web experience created by author Paul Orwell, lets users apply for a job with someone who sounds just like Donald Trump. It's CallDonaldTrump.com and its piquing curiosity for people on both sides of the aisle. 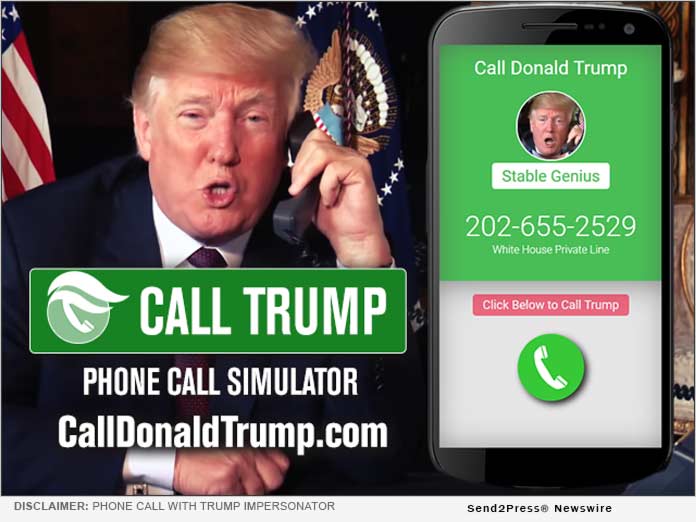 A new and interactive web experience created by author Paul Orwell, lets users apply for a job with someone who sounds just like Donald Trump. It's CallDonaldTrump.com and its piquing curiosity for people on both sides of the aisle.

This parody site is akin to the infamous Mad Libs game where players randomly select words to fill in story gaps and end up with wildly amusing results. CallDonaldTrump.com gets equally funny and sometimes even terrifying outcomes. It just depends on how the user answers "President Trump's" questions.

During an exhaustive interview of five true or false questions, the faux President Trump will decide whether the user is fit to serve in his administration or not. In less than one minute, he or she will be hired or fired. Be dishonest with him and get the job; honesty will likely end up in a hang up.

Users are encouraged to share their employment results on Twitter via a single click. After all - it's Trump's social media platform of choice, so he'll be glad when people do.

How does it work?

It's free to use and users simply click a button and interview for a job working for "Donald Trump." The site uses Google Chrome's in-browser speech recognition coupled with a Donald Trump voice impersonator to give anyone who clicks the green call button on the website the experience of interacting with Donald Trump. It's responsive and interactive with random elements so no two phone calls are exactly the same.

"It's one thing to hear Trump on the news, but quite another to get him on the phone and talk with him one-on-one," Orwell says. You can also call the Donald Trump experience at: 202-655-2529.

This interactive experience works on phones, tablets, laptops and desktops and Orwell has similar apps in the works. Next up is a Montreal Cognitive Assessment delivered by President Trump to check each user's memory recall and compare it to his own. Other applications in design will have fun with James Comey and Stormy Daniels too.

"Change your words and change the world," Orwell suggests.

Visit https://calldonaldtrump.com/ to find out what fate has in store.

A businessman and writer living in Washington, D.C., Orwell yearns to return to a world where politicians reach across the aisle and engage in healthy debate and bi-partisan compromise.

Orwell has written three books about Trump, including: "Sad! Donald 'Biff' Trump is President," and "Best Library Ever! Worst President Ever." He points out that his namesake, George Orwell, once said, "We know that no one ever seizes power with the intention of relinquishing it. Power is not a means; it is an end."

Disclaimer: Website is not endorsed, created or managed by Donald Trump, or any company or subsidiary owned by President Trump. It is intended for entertainment purposes only.