Stuttering Comedian, Nina G. announces the release of her second book: "Stutterer Interrupted: The Comedian Who Almost Didn't Happen" (ISBN: 978-1631526428; August 6, 2019). While childhood angst and everyday incidents offer fodder for her stand-up comedy on stage, Nina G. peels aside the punchlines to share her very personal story in her new book. 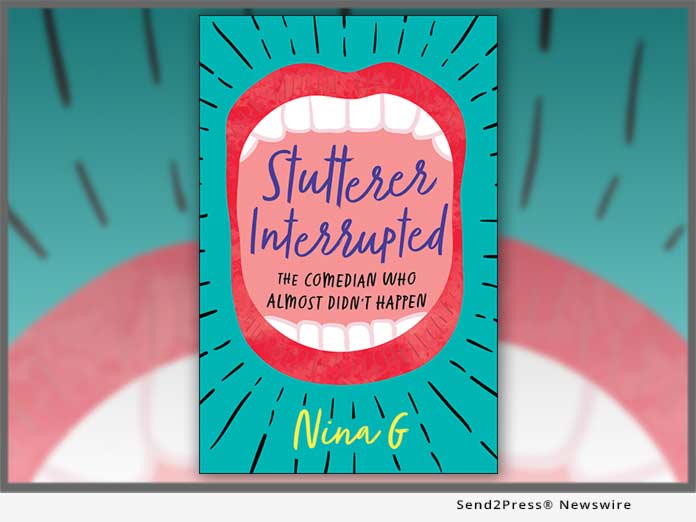 Stuttering Comedian, Nina G. announces the release of her second book: "Stutterer Interrupted: The Comedian Who Almost Didn't Happen" (ISBN: 978-1631526428; August 6, 2019; She Writes Press). AS I WAS SAYING... If I could get a word in edgewise...I wasn't done yet... If you've ever been cut off mid-sentence, these phrases of frustration are familiar. Now imagine a lifetime of interruptions as a person who stutters? To suffer the impatience of others, whether well-intended advice or just blatant rudeness when all you want to do is finish your thought; indeed, to finish saying even one word.

Welcome to the world of Nina G.: Professional Speaker, Stand-up Comedian, Author, and person who stutters. Sound like a joke? She'd be the first one to say it - and she has - audiences across the nation. Her humor is one that informs and entertains. One that gives hope to those who stutter, and insight to those who don't.

While childhood angst and everyday incidents offer fodder for her stand-up comedy on stage, Nina G. peels aside the punchlines to share her very personal story in her new book, "Stutterer Interrupted: The Comedian Who Almost Didn't Happen." The book, to be released August 2019, shares how Nina's life-long dream of becoming comedian almost died because she thought a person who stuttered could never go on stage, be on a microphone, and do a killer set.

Sales information for the book: https://www.stuttererinterrupted.com/.

About the book:
If you stutter or know someone who does, you know the reactions many people have. Nina G. has experienced everything. From hearing back-handed compliments like, "You are such an inspiration - if I talked like you I wouldn't talk at all!" to funny looks and inquiries about whether she has considered intrusive brain surgery. People often interrupt, thinking it's helpful to guess what she is going to say. But it isn't just the interruptions from others that created a barrier for this comedian. Even worse were the self-imposed interruptions due to the stigma she internalized as a person who stutters.

As a child, Nina wanted nothing more than to be a comedian. Stutterer Interrupted: The Comedian Who Almost Didn't Happen is Nina's story about how stuttering caused her to first abandon her dreams, then to embark on a journey towards embracing her voice that culminated in a career as one of only a handful of stuttering stand-up comedians working today. "Nina's story maps her transformation from isolation and shame to realizing the power of her voice through comedy."

Through stand-up comedy, stuttering comedian Nina G. challenges the status quo of how people who stutter are perceived onstage and off. In the 1960s, psychologist Joseph Sheehan created the analogy of the "stuttering iceberg," in which the tip of the iceberg is only what people hear (the stutter), and all that is underwater are emotions like shame, denial and isolation.

Using humor and easy to follow explanations, Nina G. turns this analogy on its head, substituting negative emotions with positive ones such as pride, acceptance and community. She illustrates how both of the icebergs played a part in her development as a person and as a comedian. Nina's road to realizing her lifelong dream of stand-up comedy has been paved with funny, absurd and touching experiences.

She shares all these with the reader in her singularly quirky and humorous tone.

About Nina G.:
Comedian - Nina G. was the only woman who stuttered in the stand-up comedy world when she started eight years ago. She co-produced the Comedians with Disabilities Act, a national touring comedy show featuring exclusively comedians with disabilities. She also went on to produce the first compilation album to feature, as the album title suggests, Disabled Comedy Only. Nina G's brand of comedy reflects the experiences of many with disabilities: the problem is not the people with disabilities, but a society that isn't always accessible or inclusive.

Author - Nina G's first book, "Once Upon An Accommodation: A Book About Learning Disabilities," helps both children and adults understand how to advocate for needed school-related accommodations. The book is inspired from her own childhood experience of having learning disabilities, stuttering, and being denied accommodations in her own education.

Professional Speaker - Nina G. tours the country as a conference keynote speaker. In addition to her TedX talk at San Jose State University she has presented at the Montana Youth in Transition Conference, Oregon Association on Higher Education and Disability, to high school age students with disabilities at the Kansas Youth Leadership Forum, and at college campuses for Disability Acceptance Week, Disability Awareness Month, and at seminars on universal design for learning.

For more information on "Stutterer Interrupted: The Making of a Stuttering Stand-Up Comedian," visit: https://www.stuttererinterrupted.com/.