Nifni Press, a Paraphrase, LLC imprint, released "Near Death (A Raney/Daye Investigation Book 1)" (ISBN: 978-1953566003), a paranormal mystery introducing a new team of investigators that has already garnered several 5-star reviews from ReadersFavorite.com and been lauded by noted mediums for its refreshingly real portrayal of the paranormal. 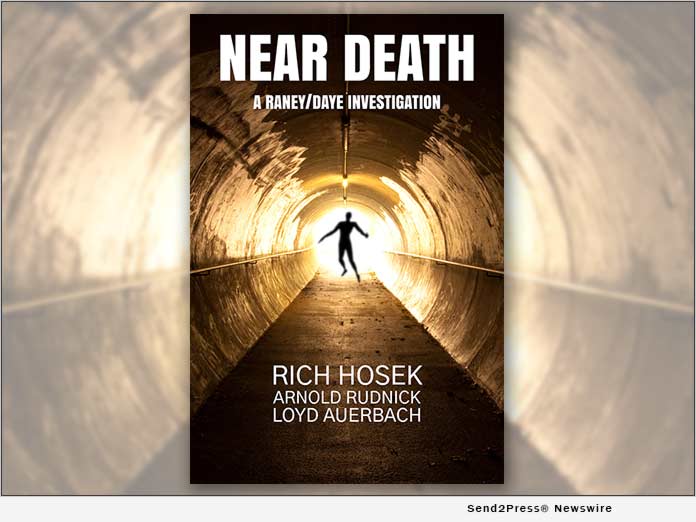 Nifni Press, a Paraphrase, LLC imprint, released "Near Death (A Raney/Daye Investigation Book 1)" (ISBN: 978-1953566003), a paranormal mystery introducing a new team of investigators that has already garnered several 5-star reviews from ReadersFavorite.com and been lauded by noted mediums for its refreshingly real portrayal of the paranormal.

It is no wonder the book makes the unreal seem real. Co-author Loyd Auerbach, a world-renowned parapsychologist, has written several non-fiction books on ghosts, psychic dreaming and other things that go bump in the night. Loyd is a sought-after speaker on the paranormal, especially in the busy Halloween month. Why did he pick October to release Near Death? "Everybody is focused on the spooky and paranormal in October," Auerbach shared, "making the release of 'Near Death' especially relevant."

Near Death, the first book in the Raney/Daye Investigation series, was written by Rich Hosek, Arnold Rudnick and Loyd Auerbach, who worked from Chicago, Los Angeles and San Francisco, respectively, to adapt a script they wrote together into a "Great read," according to Evidential Spirit Medium Sandra O'Hara. "Strong characters, bad guys and ghosts with a killer twist." NY Times bestselling authors have lauded the work, which is Loyd's first fiction book, but surely not his last. "The late Martin Caidin, author of 'Cyborg,' the basis of 'The Six Million Dollar Man,' urged me to get into fiction," Auerbach recalled. "Both before and after he died. I'm very proud to be part of this project, bringing my own paranormal experiences to Raney and Daye Investigations."

"Near Death" is based on an original screenplay the trio wrote in 1992 called "Raney & Daye: Supernormal Sleuths." Before that, it was a television series pitch called "Psi Cops."

"This was before 'The X-Files,'" Arnold recalls. "Nobody was ready for a paranormal television show - and a few people thought it was about fraternity police, so we decided to change the title."

Rich began the task of updating the trio's almost 30-year-old work a year ago. "The process of turning a movie into a novel has always intrigued me. I've enjoyed movies based on novels, but the other way opens up exploration into character that you can't do in a screenplay," Hosek said. "I began writing novels recently, and Raney and Daye came to mind because of all of Nate and Jennifer's untold stories. But it wasn't something I wanted to do without Arnold and Loyd. I reached out to see if they would be interested in this project, and they both responded, 'When do we start?'"

Loyd recently completed the team effort "ESP Wars: East & West" and has written numerous books on the paranormal, including the definitive "ESP, Hauntings and Poltergeists: A Parapsychologist's Handbook." Rich has also written "The Dead Kids Club," which will be released in 2021. Arnold wrote the award-winning paranormal pre-teen book, "ESPete: Sixth Grade Sense" and the inspirational children's book "Little Green." Together, Rich and Arnold have written several feature scripts and for numerous television shows, including "The Fresh Prince of Bel-Air" and "The New Addams Family."

"NEAR DEATH" introduces parapsychologist Dr. Jennifer Daye and police detective Nate Raney in a ghostly mystery. When Nate is shot during a high-stakes robbery, he awakens from the ordeal during which he was clinically dead with the information he needs to track down the men who shot him. However, he remains skeptical that there is anything paranormal about the revelations. Jennifer believes otherwise and tries to convince Nate to share the story of his near-death experience. Nate is reluctant, but she does convince him to team up with her for the investigation of an uninvited ghost in a woman's apartment. "NEAR DEATH" brings this investigative odd couple together in a fast-paced story that takes you on an exciting journey through the paranormal that draws Jennifer and Nate into a decades-old cold case.

Loyd Auerbach, MS, is a world-recognized paranormal expert with thousands of media appearances and the author or coauthor of nine paranormal books and one on publishing and publicity. He is President of the Forever Family Foundation (since 2013, and Director of the Office of Paranormal Investigations (since 1989). He is on faculty at Atlantic University and JFK University (National University) and teaches online Parapsychology courses through the Rhine Education Center. He is on the Board of Directors of the Rhine Research Center and the advisory board of the Windbridge Research Center. He is a past president of the Psychic Entertainers Association, and besides working as a parapsychologist, he performs as professional mentalist Professor Paranormal (and occasional chocolatier). Follow him @profparanormal on Twitter.

Rich has written for numerous television series with his writing partner Arnold Rudnick including, "The Fresh Prince of Bel-Air," "Star Trek: Voyager," and "The New Addams Family" for which they won a Leo Award for Best Writing for Comedy or Variety. More recently he has been focusing his efforts on novels and short stories. He is a fan of Legos and Doctor Who now that there is a Doctor Who Lego set, his life is complete. Be sure to check out his other novels, short stories and non-fiction at RichHosek.com, and follow on Twitter @RichHosek and on Facebook @Written by Rich Hosek.

Arnold studied film and accounting at the University of Illinois, Urbana-Champaign, then moved to Los Angeles, where he worked in feature development at Paramount Pictures and Gary Lucchesi Productions. Arnold and Rich have collaborated on numerous scripts for film and television, including "The Fresh Prince of Bel-Air," "Star Trek: Voyager" and "The New Addams Family." He has also written children's books, including "ESPete: Sixth Grade Sense," which won a silver medal in the Moonbeam Children's Book Awards and Reader's Favorite Awards and was a pick in Danny Brassell's Lazy Readers Book Club, and "Little Green." He and his wife live in Los Angeles, California.