J2B Publishing announces the release of "Uncle Rocky - Fireman #10 - Ice Rescue" (ISBN: 978-1954682160), authored by James Burd Brewster. It's the 10th Uncle Rocky - Fireman book in the "Glad to do it!" children's series and is illustrated for kids aged 3-7. The series honors first responders by retelling true-life emergency response stories through the eyes of its characters: Uncle Rocky - Fireman, Officers Jack and Kate and EMT Morales. 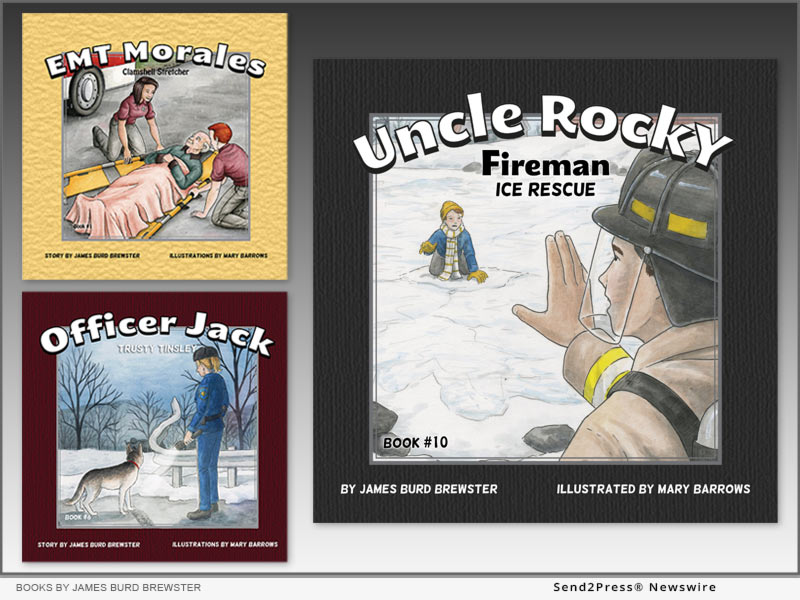 J2B Publishing announces the release of "Uncle Rocky - Fireman #10 - Ice Rescue" (ISBN: 978-1954682160), authored by James Burd Brewster. It's the 10th Uncle Rocky - Fireman book in the "Glad to do it!" children's series and is illustrated for kids aged 3-7. The series honors first responders by retelling true-life emergency response stories through the eyes of its characters: Uncle Rocky - Fireman, Officers Jack and Kate and EMT Morales.

"Ice Rescue," illustrated by Mary Barrows, tells the story of three New York City Fire Department (FDNY) firefighters from Ladder 54 where Tom Yuneman, Chris Harkinish and Kevin Hillman rescued a stranded boy from the ice in the Bronx River. Other books in the series also center on firemen as heroes.

The idea for the "Glad to do it!" series first came to be when Brewster started telling bedtime stories to his two oldest boys (ages 5 and 3). He made up a character named Uncle Rocky - Fireman.

As he told the stories, a pattern emerged. The alarm would sound, Uncle Rocky would dress for the fire, test the fire truck's siren and horn, respond to the emergency and save the day. When thanked for his rescue, Uncle Rocky always said, "Glad to do it!" During the storytelling, Brewster's boys, now 38 and 36, would "pretend" dress for the fire, shout out the fire truck sounds and roar "Glad to do it!" along with Uncle Rocky.

"Since firefighters are usually humble when thanked for doing their duty, the last sentence of every story is 'Glad to do it!'" Brewster explains. "And, so the series was born."

As the series became known, parents started asking Brewster to write about police officers and EMTS too since they found their young children loved them as well.

In the also recently released "Trusty Tinsley," (ISBN: 978-1954682153), the sixth Officer Jack book in the "Glad to do it!" series, a Shiloh Shepherd leads Trooper Sandberg of the New Hampshire State Police (NHSP) and Lebanon, New Hampshire and Hartford, Vermont first responders to the car wreck of its owner. Officer Jack, an African-American male, and Officer Kate, a white female, are partners in the stories.

"It was a story right out of Lassie," Brewster says. "First responders go to rescue a stray dog on the highway and the dog leads them to his owner, who'd been thrown from his car and was freezing to death. He saved his life."

"Baby's Breath" (ISBN: 978-1954682146), the fifth in the Officer Jack series, is a Brewster favorite. TSA Officer Cecilia Morales was working the scanner line at Newark Liberty International Airport. She scrambled over a bunch of equipment to reach a baby who had stopped breathing and her medical training prevented a horrible holiday tragedy.

"My sister sent me the story and I knew it'd be perfect for the Officer Jack series," Brewster says.

Brewster was personally involved in "Clamshell Stretcher," (ISBN: 978-1941927519), the first EMT Morales story in the series. This story describes how EMTs and paramedics from Waldorf Station 12 in Charles County, Maryland used a "Clamshell Stretcher" to lift a man off the ground without causing him undue pain.

"I was driving home in a light rain and saw a man on the ground surrounded by neighbors," Brewster says. "I stopped and held an umbrella. The man had a dislocated hip and EMTs used a 'Clamshell Stretcher' to lift him off the ground. It was an amazing invention, so I wrote a story about it."

The "Glad to do it!" series is unique in that the stories retell actual emergency responses, encourage children to play-act and use adult characters as role models so children learn to go to adults for help. It also teaches humility with its final "Glad to do it!" sentence.

To learn more about the series, and download a free eBook version of "Uncle Rocky - Fireman #1 Fire!" visit: https://www.gladtodoit.net/.

James Burd Brewster, president, J2B Publishing and the author of the "Glad to do it!" series started J2B Publishing in 2013 as an Indie Press with a mission to publish "Good books for boys and girls." It now specializes in publishing new children's book authors.

Brewster grew up in Albany, NY, learned to sail on Lake Champlain, graduated from the United States Coast Guard Academy, drove an icebreaker to the Arctic and retired after a 23-year career. He and wife, Katie, raised and homeschooled five children and live in southern Maryland.

Brewster's father taught him, "You can grow grass or children, but not both." Like his father, he decided to grow children and now writes and publishes children's books to help other parents grow their children.