SunBug Solar, a Massachusetts-based solar solutions provider, has completed the construction of a dual-use solar-terra photovoltaic system in Monson, Massachusetts. The design of the system allows the local landowner to harvest both sun from above and crops from below on land which has been in the family for three generations. 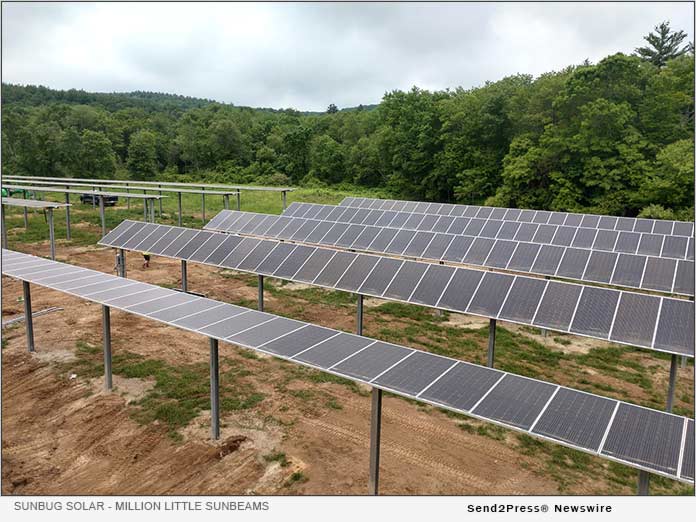 SunBug Solar, a Massachusetts-based solar solutions provider, has completed the construction of a dual-use solar-terra photovoltaic system in Monson, Massachusetts. The design of the system allows the local landowner to harvest both sun from above and crops from below on land which has been in the family for three generations.

The system, dubbed "Million Little Sunbeams," and owned by Monson native Nate Tassinari and his wife Ania, is the first operational dual-use agricultural photovoltaic (PV) system in the state.

Generally, solar projects on agricultural land face pushback because traditional solar systems cover the ground in a manner that significantly reduces the amount of available farmland. This project did not face this kind of opposition because a dual-use system doesn't replace crops, it works with them. The array is designed to allow sufficient sunlight for the crops and raised high enough in the air to allow tractors continued access underneath.

"It's a good compromise between the need for innovation and respecting the land," said Tassinari. "Plus, it's my backyard. I want it to be both functional and beautiful!"

Just like all operations on the farm, the system must be designed to make a profit. Designing Million Little Sunbeams to be the most efficient PV system possible required pairing together several innovative technologies.

Million Little Sunbeams features an East-West tracking system from RBI Solar. The array is designed with 20 ft row-spacing and a minimum panel height of 10 ft to improve performance and to allow tractors continued access. Dual-use systems use special solar photovoltaic (PV) racking to harvest power from the same sunlight that nourishes the crops that grow under the mounts. On typical PV systems, solar panels are fixed and so consume the energy from direct sunlight themselves, shading the ground below and rendering it not suitable for crops.

Additionally, the Million Little Sunbeams project uses Longi Perc bifacial panels which allows some solar energy to go through the panels reaching the plants below while capturing radiation on the opposite side of the panel as it bounces off the ground and crops below. Lightly colored crops, such as dry hay, are particularly helpful to this process.

Finally, per panel power optimizers mitigate factors such as shading and aging of the solar panels. Using SolarEdge optimizers, the maximum power point of every module is tracked individually. This advancement prevents one panel from slowing down the rest of the system from operating at full capacity.

The land where the solar array is located has been in his family since Nate's Grandmother bought it more than 70 years ago. The neighboring Murphy Dairy Farm, owned and operated by Nate's cousins, utilize the fields to help feed to their cattle. The Murphy Farm was established in the 1910s by Nate's Great Grandfather; Thomas F. Murphy. Today the farm grows hay, produces milk, and now hosts two types of honey-producing bees as well as a young orchard with variety of fruits, exemplifying the diversity of resources this land generates.

Tassinari had worked with SunBug to put solar on his home in Boston, and reached out to SunBug to see what could be done with this land. When SunBug designed a dual-use solar photovoltaic agricultural solution, Tassinari was able to reconcile tradition with technology, and named the project Million Little Sunbeams after a book by conservationist and author Thornton Burgess.

Tassinari will be able to provide power not just to his own home, but through the Community Solar SMART program, he will also have the opportunity to sell this green power back to the community. Participants save money on their utility bills by purchasing through MLS, and part of the proceeds will be donated to Norcross Wildlife.

The website for Million Little Sunbeams - Millionlittlesunbeams.com - is scheduled to go live on October 22, 2020. There, interested Monson residents and anyone who has National Grid as their electricity provider will be able to learn more and sign up to purchase energy fresh from the farm.

SunBug Solar is a local, Massachusetts owned-and-operated solar energy consulting and installation company with offices in Arlington and Westfield, Mass. SunBug Solar creates positive environmental and social impact by exemplifying our core values of responsiveness, resourcefulness, and reliability with our customers, within our industry, and among our teammates. Founded in 2009 and a Certified B Corporation.

*Caption: Bifacial solar panels allow crops to grow on this family farm while producing energy from the sun.