As we zoom into the future in 2021, we see first-hand that the universe is filled with limitless opportunities. There's a real competition in the "race for space," and Sandra Snowden, aka Celestina, Ambassador PLANETXXI, has just entered the race with plans of her own to create The Eco City of the Future on PLANETXXI. 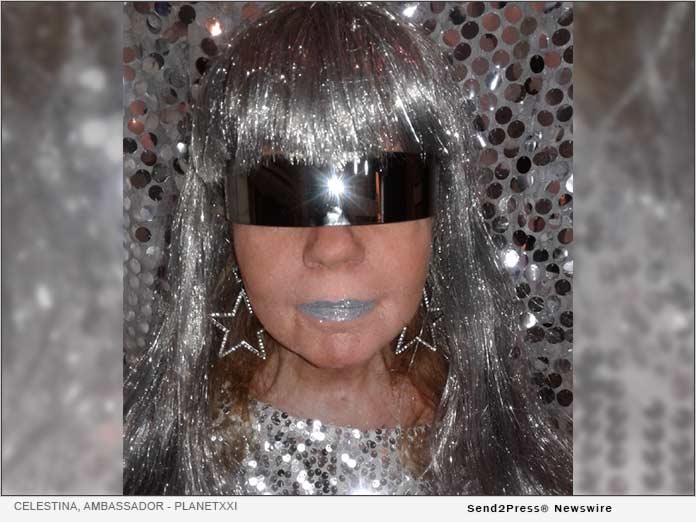 As we zoom into the future in 2021, we see first-hand that the universe is filled with limitless opportunities. Space greats are busy with plans to build Mars City, creating orbital sci-fi habitats in space and adding finishing touches on luxury spaceships for galactic-go-getters. There's a real competition in the "race for space," and Sandra Snowden, aka Celestina, Ambassador PLANETXXI, has just entered the race with plans of her own to create The Eco City of the Future on PLANETXXI. And, now she's inviting a new generation of futurists and visionaries of all ages to compete.

Celestina's newly-launched website, http://www.planetxxitv.com/, encourages futurists to sign on as virtual cybernauts who can then travel into cyberspace to the planet's space station in CyberCity. Through virtual events, and cyber connections, they can design the blueprint and masterplan for their future on PLANETXXI.

Located in the Goldilocks Galaxy, PLANETXXI is an exoplanet in the Circumstellar Habitable Zone (CHZ). It's a planet of peace and positivity and a place where dreams for the future can come true. It's also Earth's mirror planet.

"Exoplanets are real," Celestina says. "NASA's first exoplanet was discovered in 1995 and a recent study at the Carl Sager Institute revealed that exoplanets have the best odds for extraterrestrial life to exist."

Celestina believes that this is the ideal time in history for people to ignite their cosmic powers and create the Eco City of the Future on PLANETXXI.

"Space is the new frontier and if we work together as space pioneers in the 21st century, nothing is impossible," she says.

So, while many on Earth are having to stay safe at home, futurists and visionaries can join forces and unleash their imagination and innovations through video and share them with the world to see.

For 20 years, humanity has found discovery and lived-in space at the International Space Station (ISS), so the sky has no limits.

"I also agree with scientists that Earth may even cease to exist by 2100 unless there are immediate changes to its unhealthy environment," Celestina adds.

The PLANETXXI website includes Celestina's Celestial Greeting and Welcome to the Future, Think Tank of Tomorrow, Vision Quest for Futurists and the Cyber Challenge: Create the Eco City of the Future on PLANETXXI. In addition, her upcoming YouTube PLANETXXI TV Show, Show Celestina Live From PLANETXXI, will feature weekly futurists and visionaries who will discuss how people can build a whole new, eco-friendly world.

Schools are also invited to join and be part of PLANETXXI Cyber Schools of the Future, and Club PLANETXXI. Cosmic Kids of the Future will introduce Cyber Pal cartoon characters to inspire kids, and even invite them to fly on Star Rider through the galaxy and reach for the stars. The website is in compliance with COPPA (Children's Online Privacy Protection Act.)

"Time to fasten your seatbelts. We are ready to launch," Celestina says. "What role will you play in our future?"

Celestina is available for interviews from CyberCity, her orbital space station and communications center at Celestina@PLANETXXI.com or (312)953-3108.